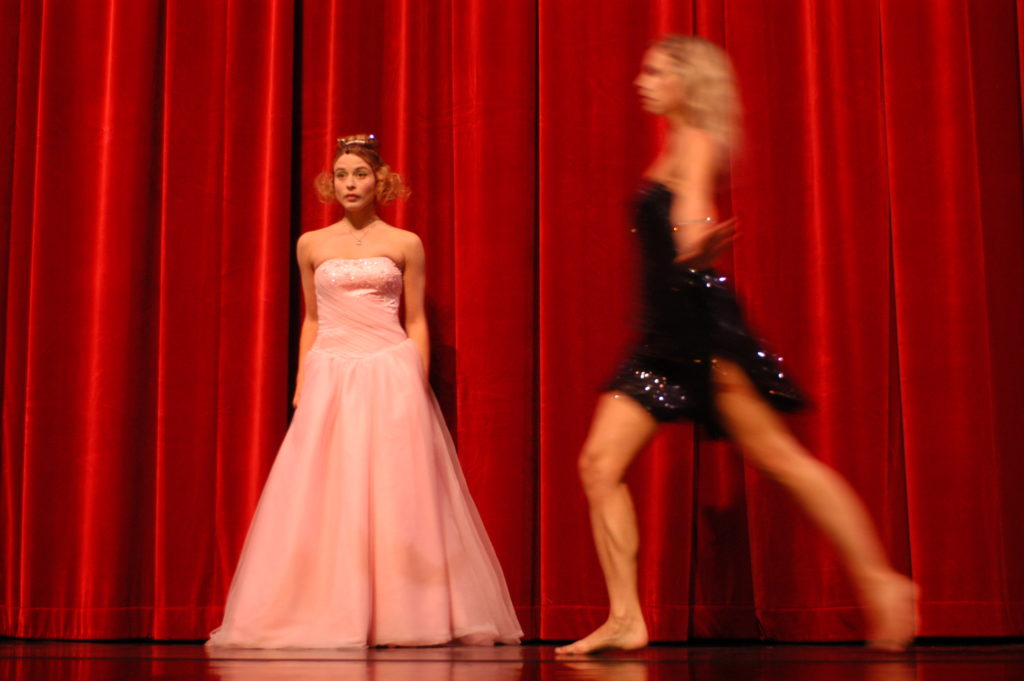 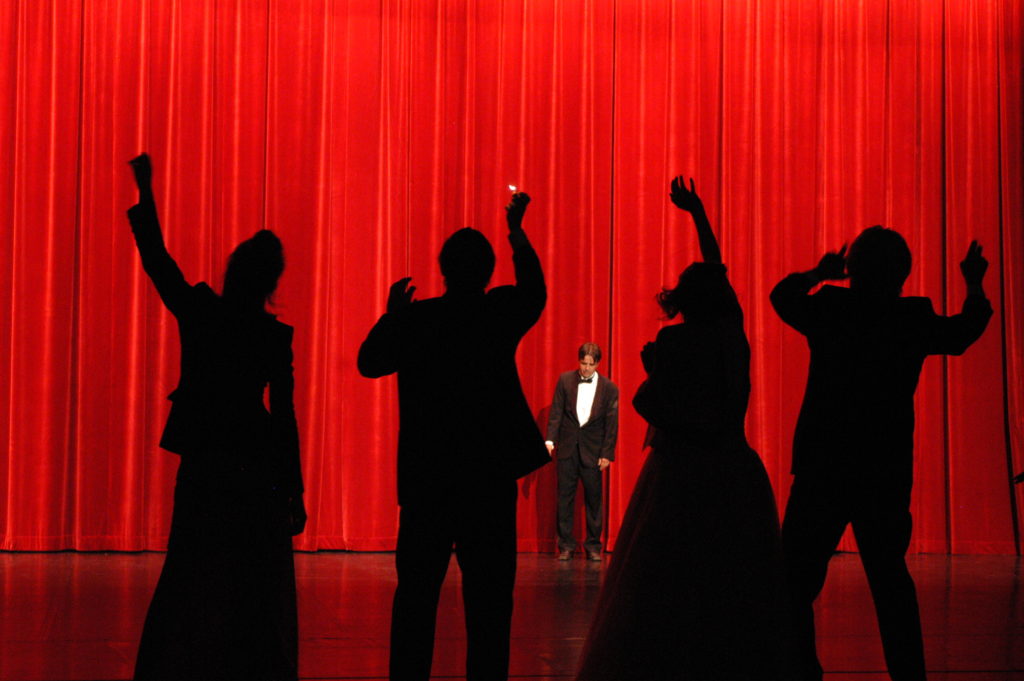 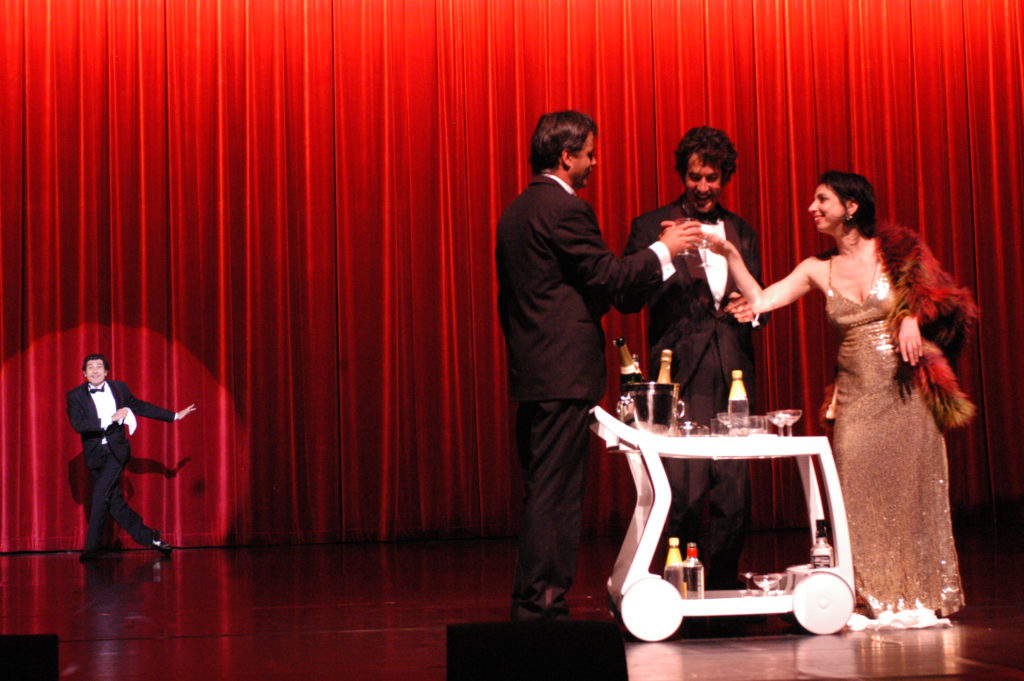 It’s been 15 years since No Paraderan was created and the scandal of the premiere at the Théâtre de la Ville in Paris is still relevant. For many people who attended the performance, the play has something mythical about it. For the company it was the beginning of the end. Many theaters turned their backs afterwards and a few years after No Paraderan the members of the company separated.

I confess I still do not understand why this particular piece caused such violent reactions; my memories are like crumbs of a puzzle, but I feel that the time has come to take the tuxedos out of the closet (hoping the moths did not get the upper hand) and present No Paraderan today for him give the consideration it deserves. It does not matter to me that a play is surrounded by mystery or scandal, my greatest satisfaction would be to be able to consider this work as a worthy witness of an era, a glimpse behind the stage curtain of our societies, a stealthy look in the mirror of contemporary dance.

I will stage No Paraderan as it was in 2004 with almost all the interpreters of the time. See you in January 2020 at the Amandiers de Nanterre. 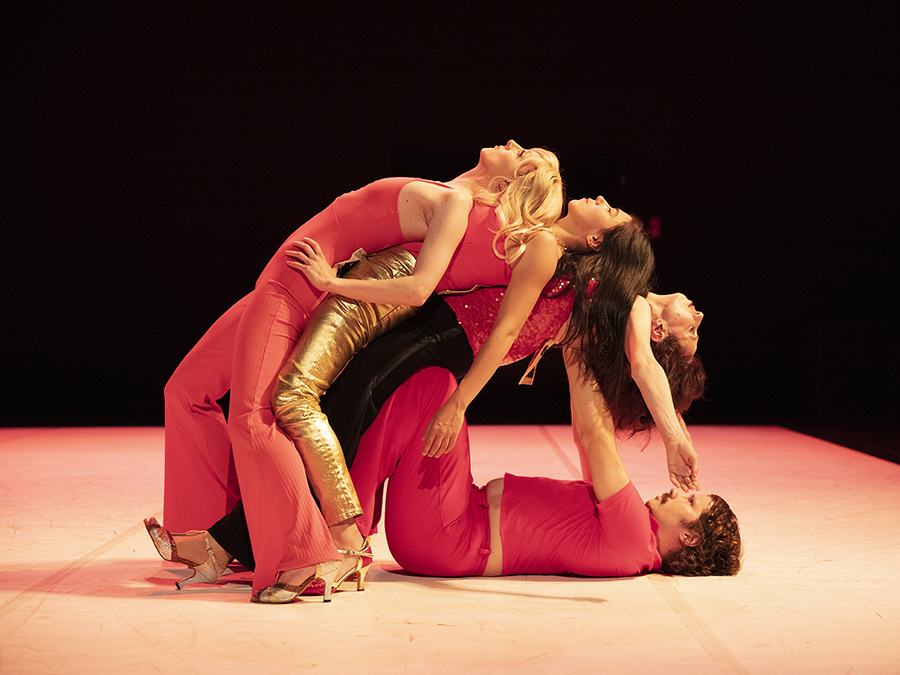 Who has not dreamed one day of becoming the king or queen of an evening, dressing up the light clothes of the musical, or even dancing like Travolta in Saturday night fever? A student of the Folkwangschulen of Essen and the London school of contemporary dance, Marco Berrettini is not waiting to realize this dream. German champion of disco at the age of fifteen, he bifurcates to France and for several years becomes one of the interpreters, polyglot narrator, of the swing choreographer, Georges Appaix. Alongside his work as a dancer, the choreographer already works on multiple projects and creations. About forty untold documents have emerged since its beginnings in 1986. A primer of record titles, hit discos of the 70s and 80s, is the dramaturgy of the show created collectively by the ten performers participating in the particular spirit of this work.This unusual disco dance contest, nimbed with a sweet pink candy light is a true precise self-mockery. The incessant parade of the numbered interpreters, endowing, in turn, with a remarkable plasticity of body all kinds of sexy postures linked to collective myths, draws us little by little behind the scenes of the exploit. 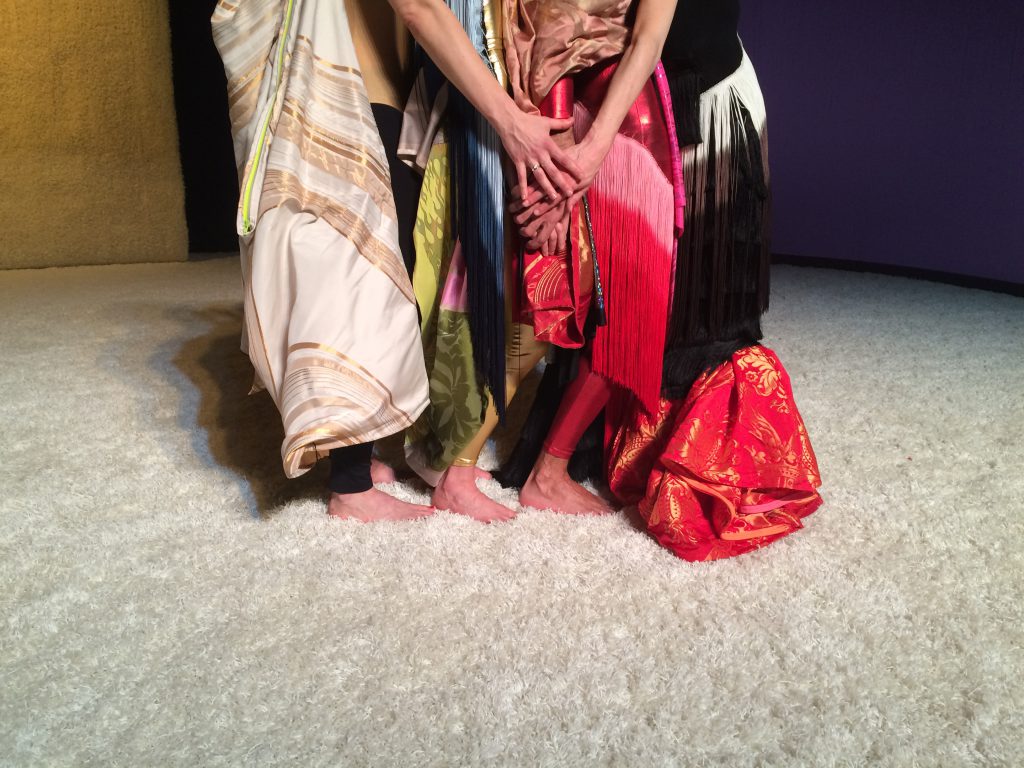 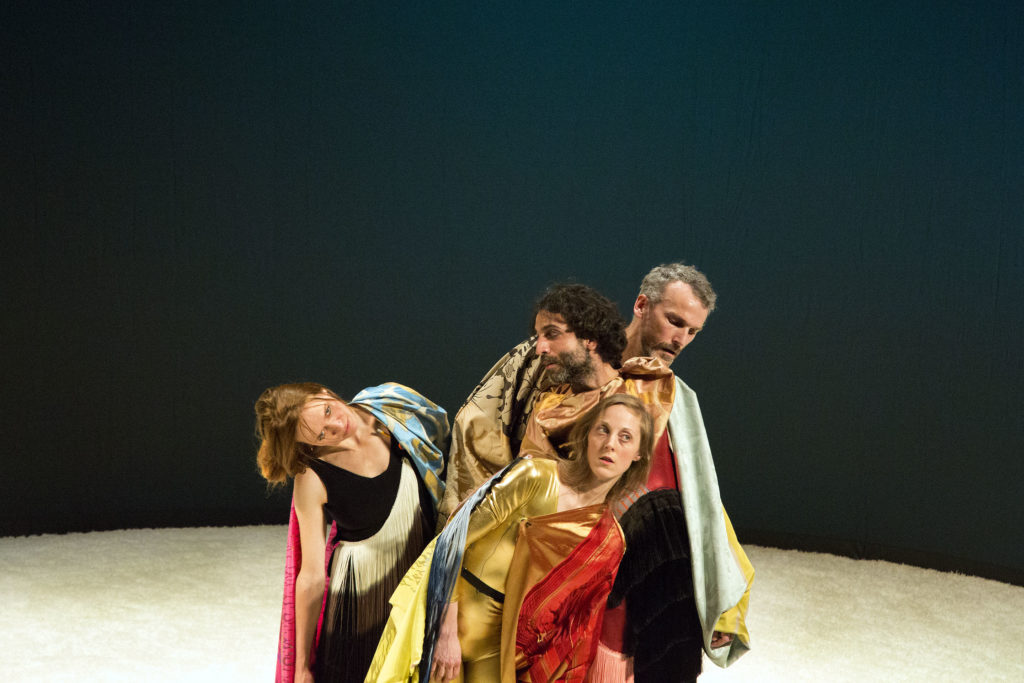 The choreographer signs a sublime and aberrant hedonist manifesto where dancers vibrate as one extra sensitive body.

Soma, from ancient Greek: the body. Soma, also called like this synthetic drug presented as a simple medicine to the citizens of the Brave New World, the dystopia of Aldous Huxley, but that actually plunges them into a heavenly sleep, the kind to defuse any form of political insubordination. Thinking of this scary and wonderful substance can help to imagine the atmosphere that emerges from the plateau of Marco Berrettini, one of the most complex, Baroque, which we have been given to see choreographed: that of a sect of ecstatic dancers, sort of vibrating bodies inexorably moved by the aberrant community they form, which seems straight out of the retro-futuristic rubble of an SF movie of 70s (cream carpet, silver jumpsuits, black piano).
In the audience exclamations fuse, half-laugh half-fear as the dancers penetrate our eyes with their enamored eyes, since hedonism is here monstrously colored, the joy by melancholy – don’t they seem to be giving all their energy for a last dance? – without the piece ever abandoning its cardinal value: that of the pure pleasure to commune as one body, as well on funk as on music by Meredith Monk.
The comparison with Huxley’s drug does not last long however. Except for considering these bodies tragically stupid, and by so interpreting this piece as the satire of a depoliticized generation, for example. We might prefer to see it as a very political tantric farce, in what it says about the freedom of bodies to be able to harmonize, their ability to make themselves extra sensitive to others, as much as to the smallest vibrations of air, plants and sounds. Her way of claiming the right to be ecstatic about it, with this irreducible strangeness, makes her a masterpiece that we would like to see touring after its creation at the Rencontres choréographiques de Seine-Saint-Denis. 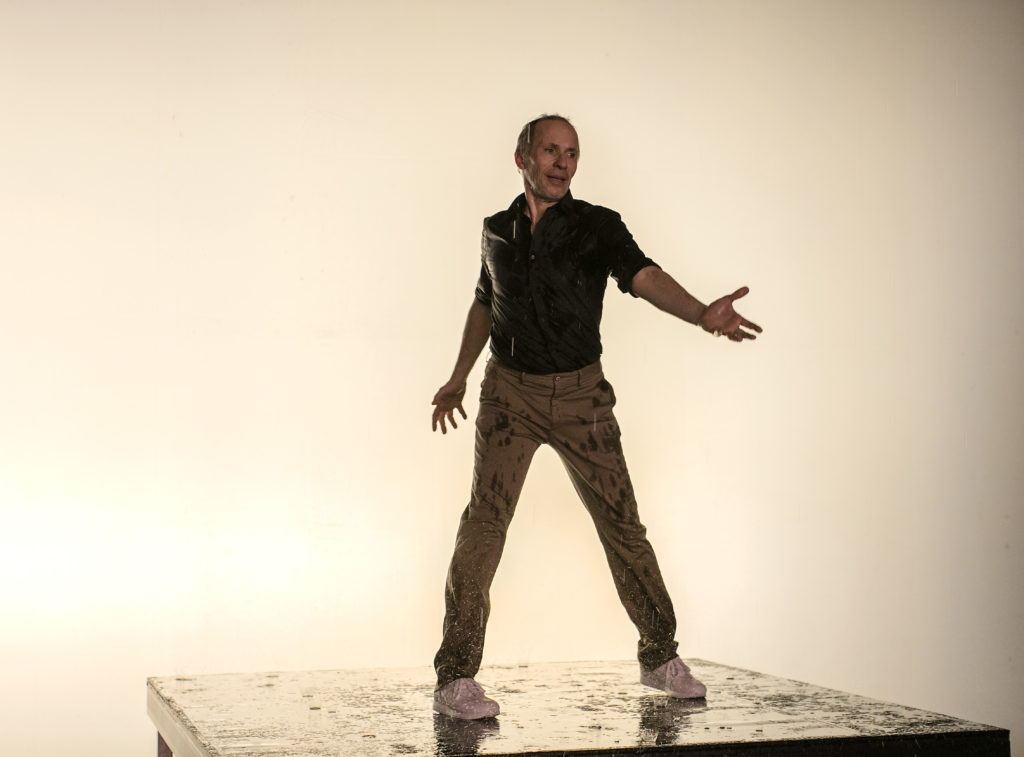 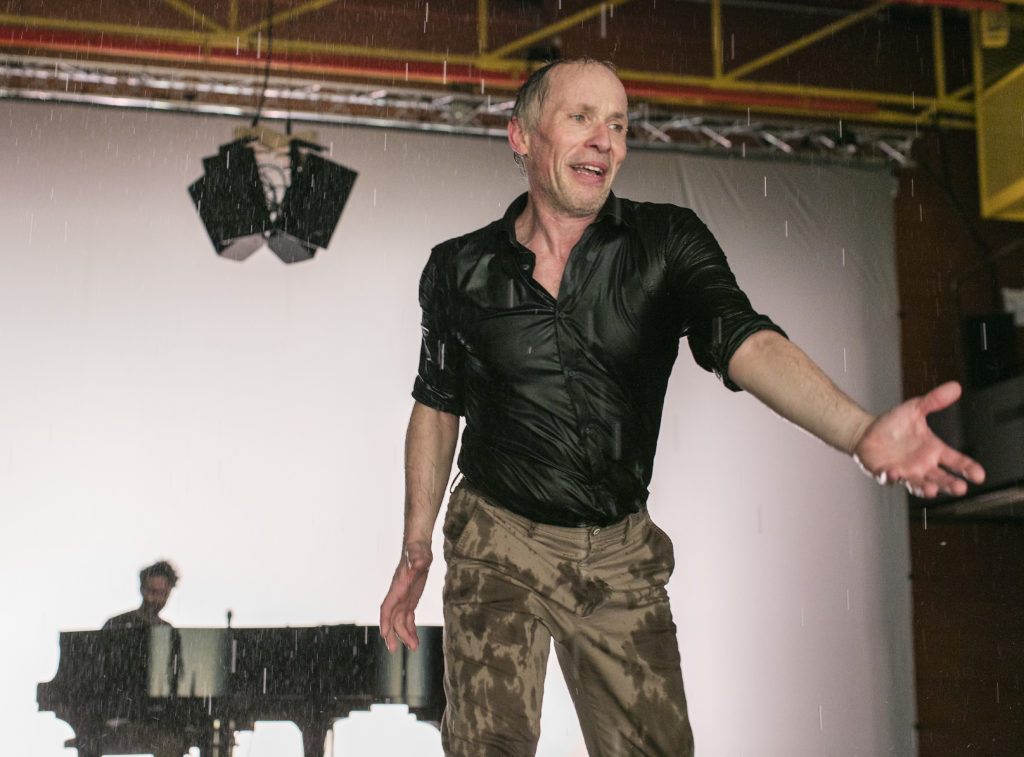 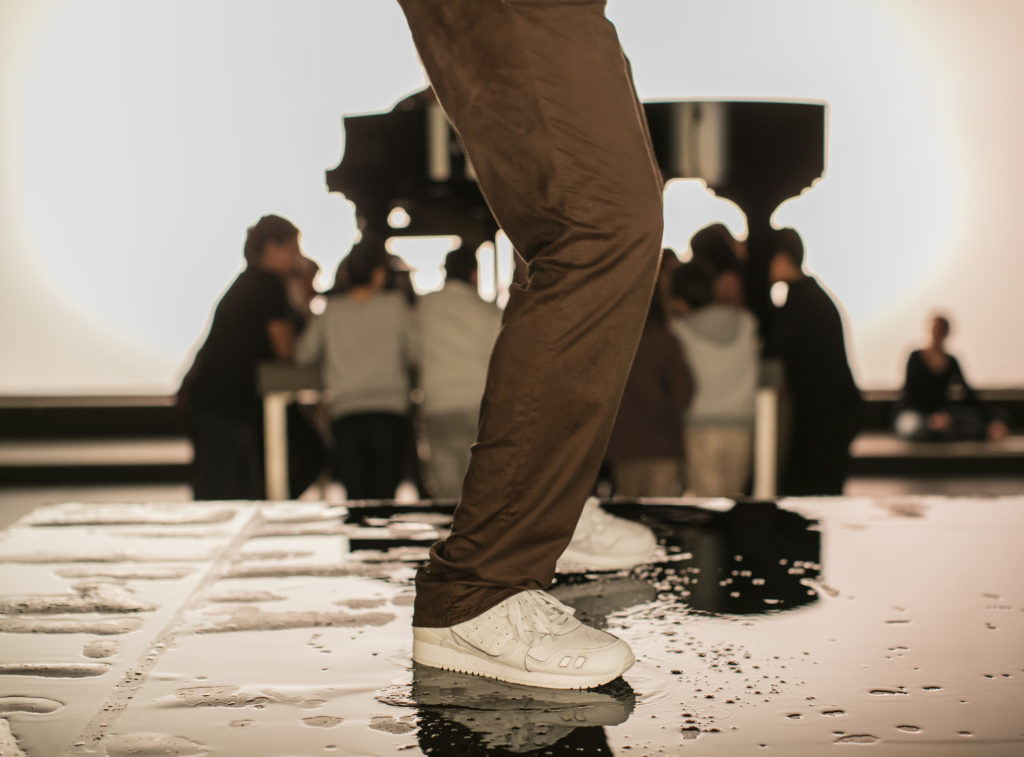 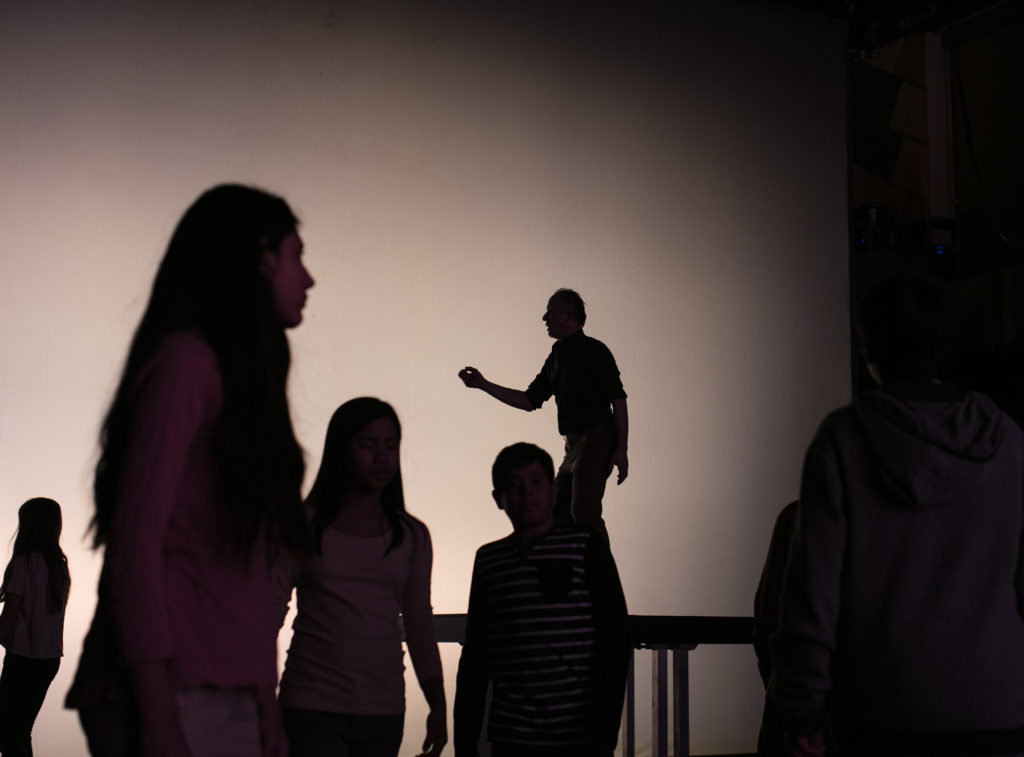 iFeel4 opens with a solo trance that revives with the disco roots of Marco Berrettini, German disco dance champion in 1979, and a children-choir slowly detaching from the audience. On serial and lyrical pop music with a metaphysical and philosophical content, composed on piano by Samuel Pajand, the children’s choir begins, spins, regroups, sings and punctually covers masks recalling the Greek tragedy bathed in the cult of primitive mysteries and translated in the form of facebook-emoticons declined in the tints of the human aura. By successive steps, the figure of the child is here a source of energy which invites to dream, to create, to think.
From Victor Hugo (calling to the barrier of the Miserables by a people of children too often betrayed and repressed) to Rilke (“You must change your life” to meet the sublime), passing through Hesse (“Universe”), there are many influences. And it’s of great intelligence, for the one’s who remember Sorry, do the Tour! (2002), inspired by the “Opening Night” by Cassavettes, exploring aging, time passing, desire for dance and the envy of others.

Mystical and Sufi Asceticism
After a duet in side steps and bare busts iFeel2 and reinterpreted diagonals iFeel3, here is a solitary icon slipping a side step, turning 360 °. The pelvis is delicately fevered with funky groovy swaying, arms bring back the space to the performer like a throbbing heart, his look in the form of a plea addressed to the public to dance together. Its form and its subversion derive from the mystical asceticism and sufism. The movements vary at each turn their rhythm and amplitude, tending towards a frenzied desperation that is racing on itself, repatriating in a decelerated way the lines of body of Travolta in Saturday Night Fever. An invitation to the other that proceeds in small psychological and physical steps. 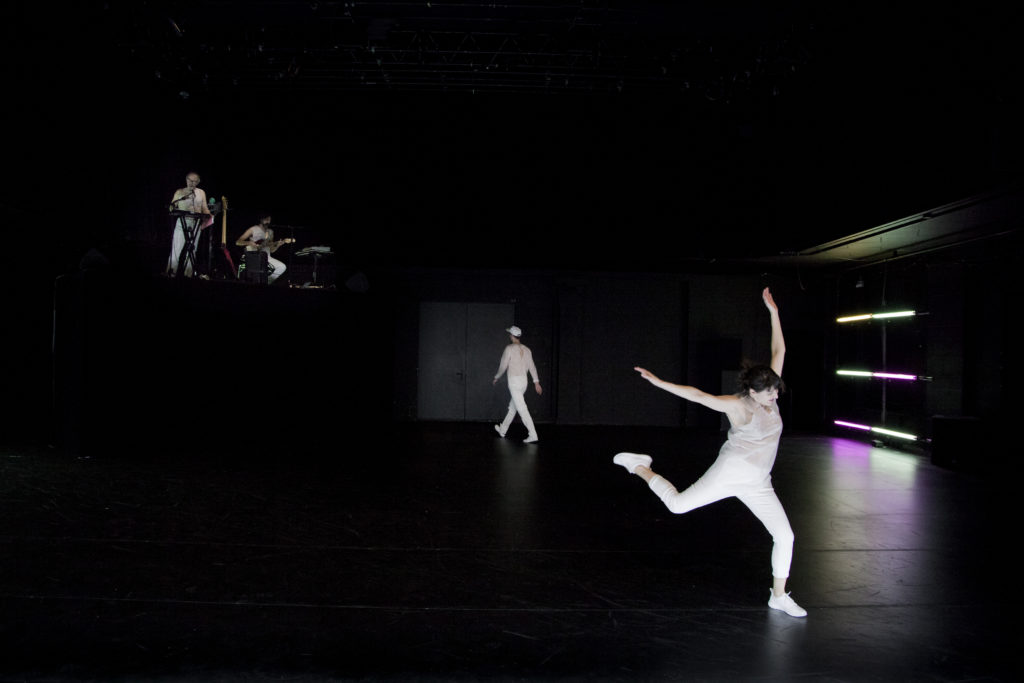 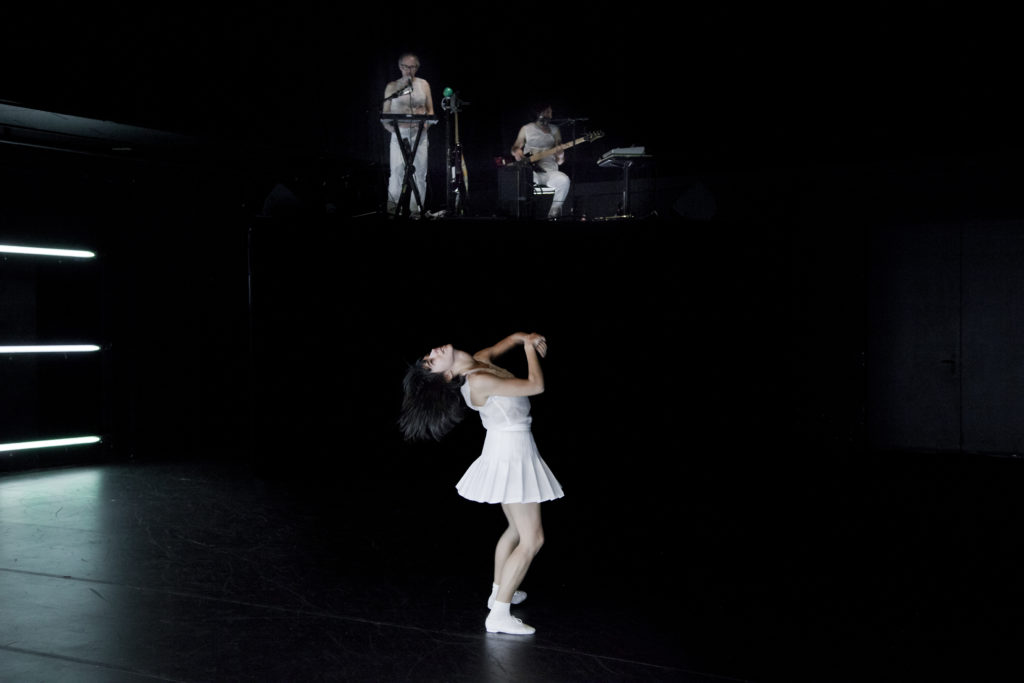 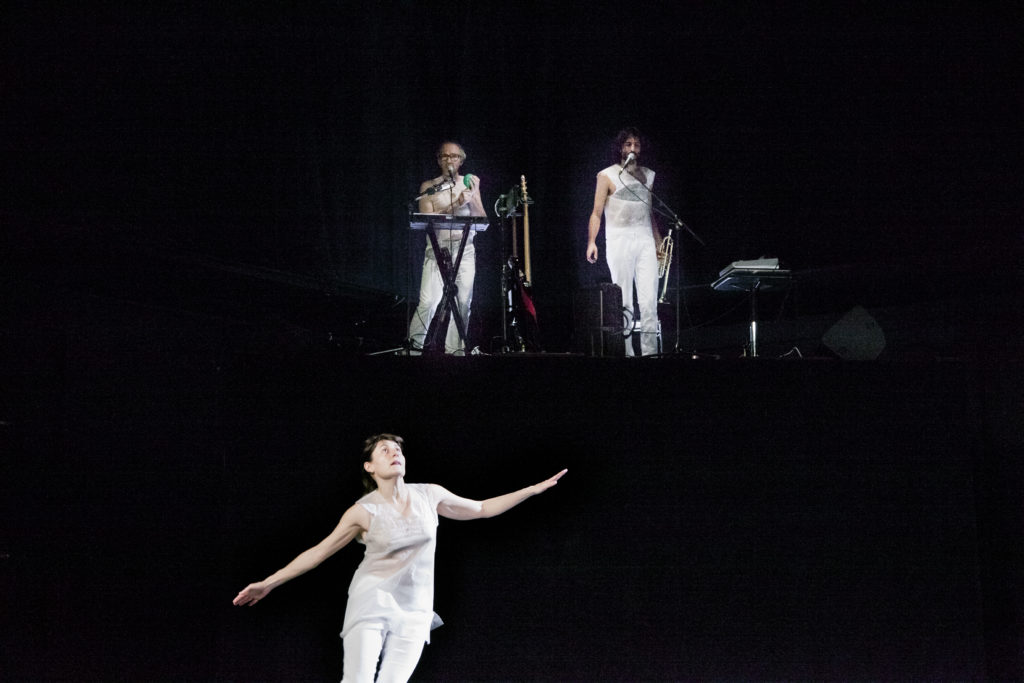 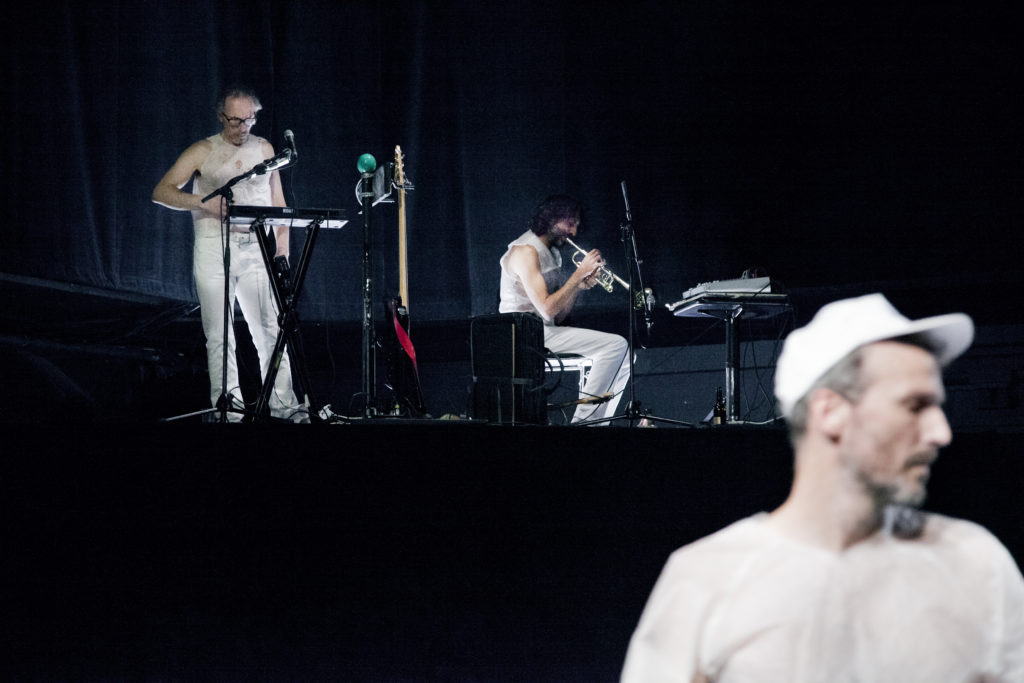 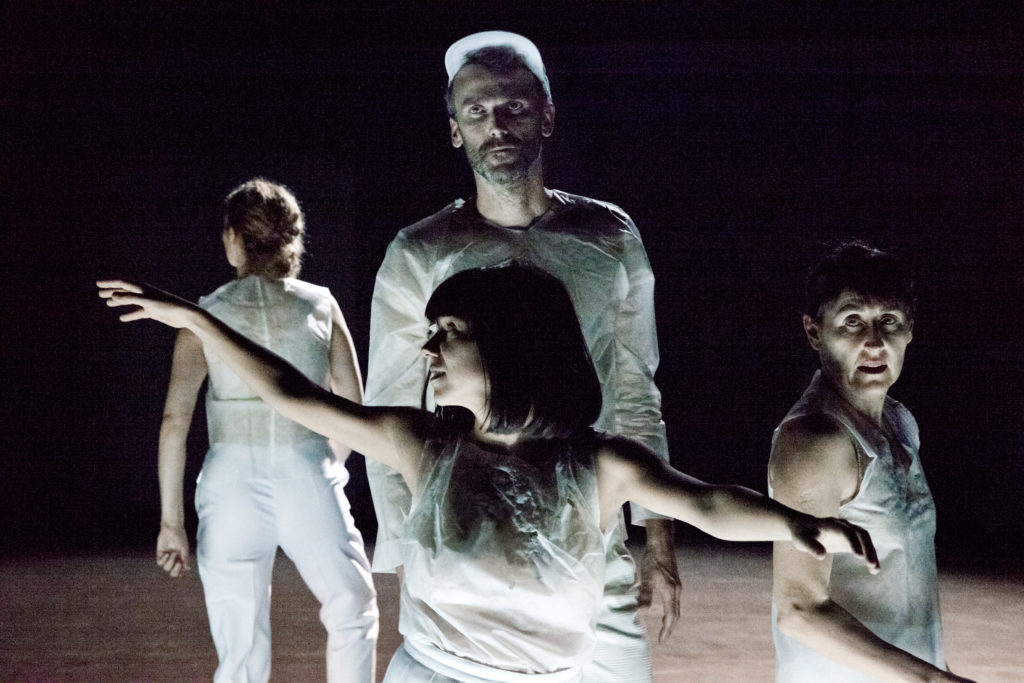 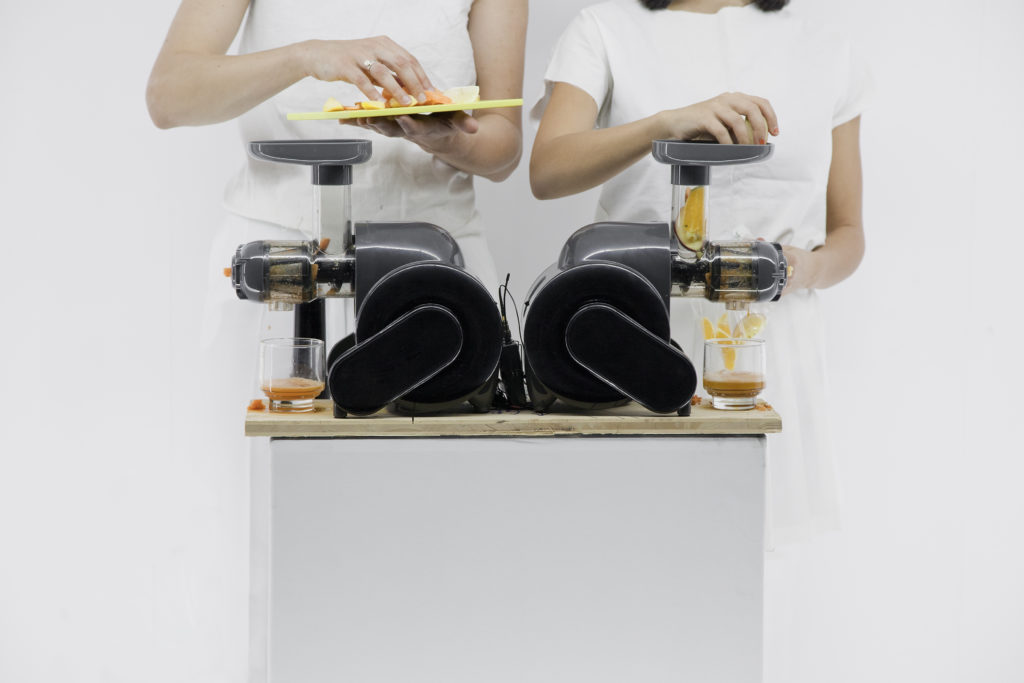 Inspired by Atlas shrugged, the bookby Ayn Rand, I wanted to create a choreographic piece which questions our abilities to socialize, our ability to project ourselves into the future, near or far, our selfishness when it comes to protect ourselves and hide the fears that inhabit us.
As in previous pieces, like iFeel2 or Cry, iFeel3 is in line with a choreography in one movement, one breath, without a structure in several scenes or chapters. The idea is to truly live the choreography as a personal “ experience”, an action to complete, an exercise on oneself. And even if I do not share the idea of total surrender of state power in favour of the individual, as advocated by Ayn Rand, I find myself quite heartened by the concept that the individual must first act by and for himself. An invitation to get our own backs, to grasp the challenges of modern slavery, which are within us, above all. For us to rise, before lifting up the others.
iFeel3 is also the story of a rock band  : Summer Music, which signs its second musical creation for stage. Music is played live and tells, alongside the choreography, its own story; songs about the state of the world, citing many activists such as Noam Chomsky or Abby Martin. 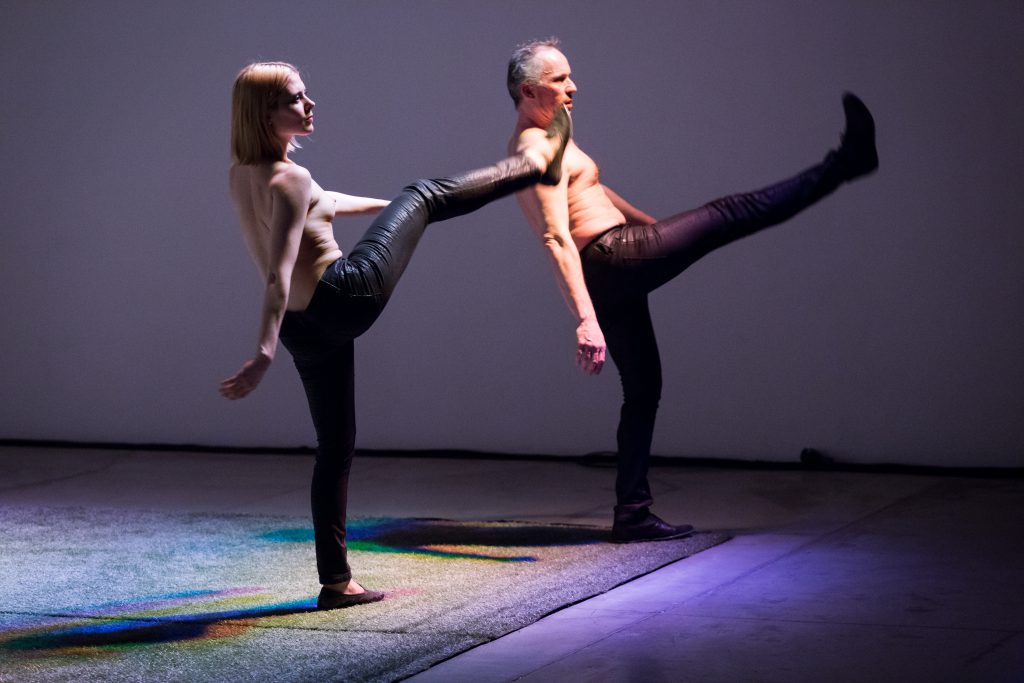 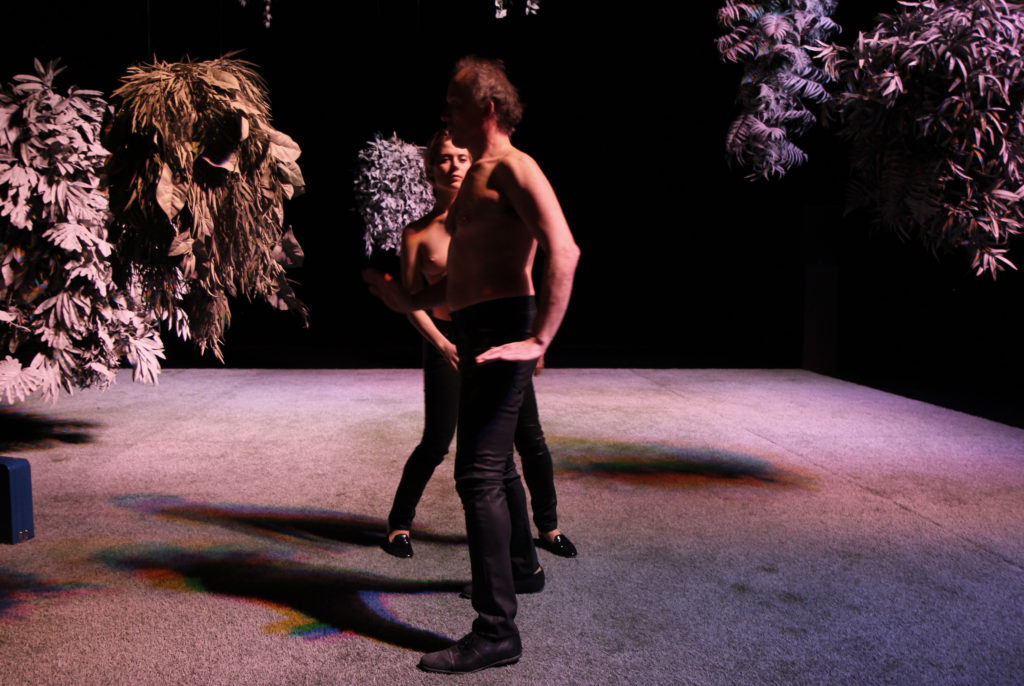 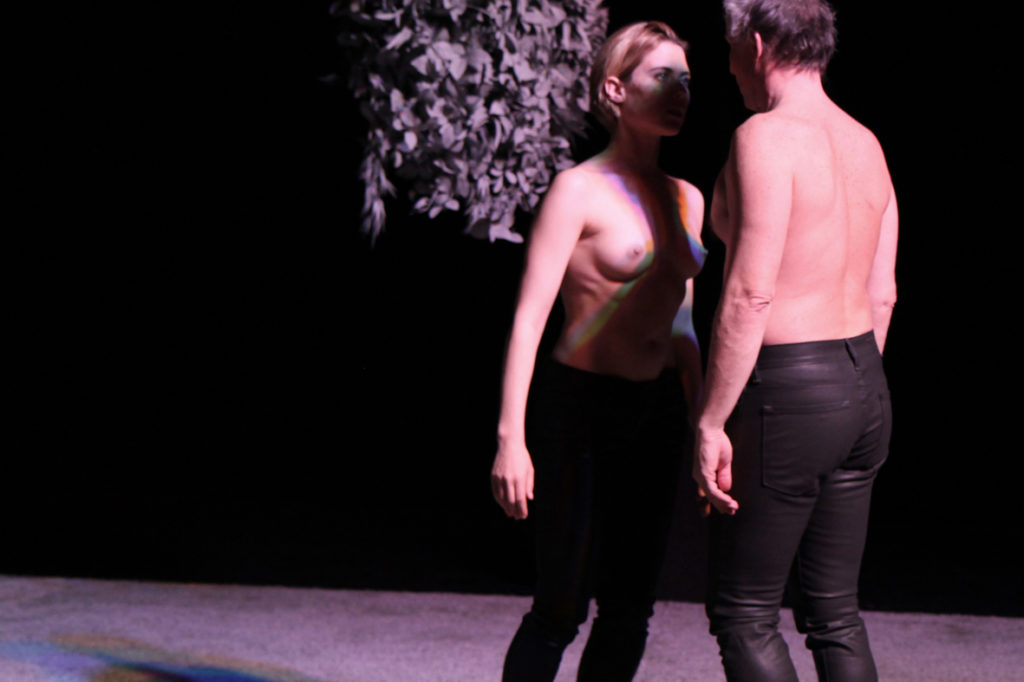 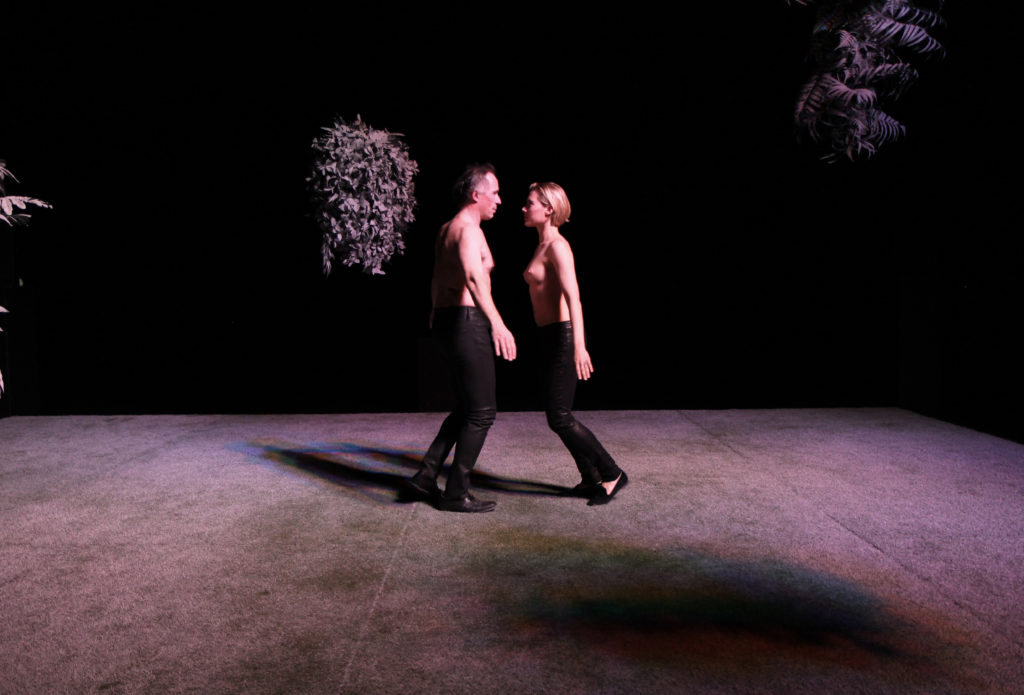 After iFeel (2009) and its angers inside our modern societies, and Si,Viaggiare (2010) which was attempting to reset a communion between beings, iFeel2 displays the mutations, the evolutions, the metamorphosis that the individual and the social « bubbles » practice in real life. There is a real emerging need to once again ask the question : Why are we here, on this earth? And what value can we assign to the birth of life? I’ve been working with some texts and books from the German philosopher Peter Sloterdijk for many years. For iFeel2, I’ve selected «  You have to change your life » (« Du mußt dein Leben ändern« ), published in 2010. With this latest creation, I am coming back on stage and I reconnect with the movement, in collaboration with Marie-Caroline Hominal. The current dance extends from a certain desire of acrobatic virtuosity to some more spiritual streams flirting with psychoanalysis, religion and the search of inner consciousness, the Jungian shadow. Our performance is a mix of this multitrack life.
Finally, the music for iFeel2 has been created beforehand, by the more or less pop band, Summer Music, formed by Samuel Pajand and myself. We wanted to compose our own libretto, to choreograph from the music and not the opposite.

« Man deserves to care about himself for he bears in his soul the seeds of his own future.» Carl Gustav Jung

Italian dancer and choreographer Marco Berrettini was born in 1963 in Aschaffenburg, Germany. His interest in dance begins in a discotheque. In 1978, he won the German Disco Dance Championship. With this experience, he attended classes in jazz, modern ballet and classical ballet. At the age of 17, he began his professional training as a dancer; first at the London School of Contemporary Dance, then graduate at the Folkwangschulen Essen, under the direction of Hans Züllig and Pina Bausch. There, he developed his interest in the Tanztheater and started as a choreographer. As a result of his training, he tries to set up his own company in Wiesbaden. To accompany his attempts to make a name for himself as a choreographer, he studied for two years European Ethnology, Cultural Anthropology and Theatrical Sciences at the University of Frankfurt. In 1988, he moved to France to work with choreographer Georges Appaix and created his own pieces in parallel. In 1999 the Kampnagel Hamburg produced his show MULTI(S)ME. Since then, Marco Berrettini has produced about 30 shows with his company. With Emil Sturmwetter prepars the year 2000, he won the ZKB Prize at the Theaterspektakel Zürich. Since 2004 he createt among others No Paraderan,*Melk Prod. goes to New Orleans(2007), iFeel (2009), iFeel2 (2012), iFeel3 (2016), iFeel4 (2017) and My soul is my Visa (2018). Marco Berrettini’s activity ranges from performance in a museum to collaborations with filmmakers, installations with visual artists at dinners with famous people who do not know him.